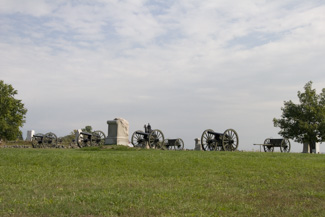 Before/during reading
With so many topics: slavery, the Underground Railroad, the battles, Lincoln's Gettysburg Address, states' rights, etc. you may wish to provide an overview for students of the “big picture” of the Civil War. A simple but informative movie is available for free on YouTube from FreeSchool. Search for it by clicking on either the Social Studies or free movies button. Project this on an interactive white board, pausing to clarify points, highlight vocabulary, and ask and answer questions. Another site with a wealth of information in concise/digested form can be found here. Though created for fifth grade, it could certainly be used to select topics to add to your students' background knowledge. This Treasure Hunt link might be useful for you to decide what aspects of the war to introduce to middle elementary students.

During reading, use the Turn and Talk strategy to have children predict what may happen next or discuss the merits of a character's choices at different points in the story.

If you decide to conduct a unit of study about historical fiction in Reader's Workshop you may want to have a look at Scholastic's site for resources and ideas for using their Dear America and My America series. Several books in the series take place in the Civil War era.

After reading
Consider reader response journals as an informal way to assess understanding. Consult the Common Core State Standards for your grade level and target ways to address them using the books below. Literature standards 3 and 5-9 might lead to writing prompts such as:

Ackerman, Karen. The Tin Heart. ISBN: 0-689-31461-2. No lexile available.
The enduring theme that the cost of war is not just in dollars and cents is evident in this story of friendship. Mahaley and Flora live on opposite sides of the Ohio River—Mahaley’s dad a ferryman, Flora’s dad a storekeeper on the other side. When tensions escalate over slavery and the use of the Ohio to move runaways north to Canada, the girls’ fathers stop speaking and the ferry stops running. The girls share halves of a tin heart necklace made by Flora’s dad in happier times, and they long for the day when they can play together once more.

Fletcher, Susan. Dadblamed Union Army Cow. ISBN: 978-0-7636-2263-3. Lexile: AD 750
Susan Fletcher weaves a fun tale based on actual newspaper accounts and stories of a cow who traveled with the Fifty-ninth Regiment of Indiana Volunteers. In Fletcher's version the narrator is a young Union soldier who is followed by his cow when he enlists. Despite attempts to send her home, the cow becomes a part of the regiment. According to the author's note, this celebrated cow was present in a number of major campaigns and skirmishes. She likely traveled hundreds of miles with the troops and her milk could certainly have saved some lives, as the supply train often could not keep up with troop movements. This is a great choice for working on building vocabulary, especially adjectives, as the narrator has many colorful describing words for the cow!

Fritz, Jean. Just a few Words, Mr. Lincoln. ISBN: 9780780732148. Lexile: 390
Although the focus for this book is primarily Lincoln's speech at the dedication of the cemetery at Gettysburg, it also offers young students a glimpse into the work and responsibilities of the president and his relationship with his young son. Fritz is a master at providing details of interest to her audience while maintaining an appreciation for what is developmentally appropriate. Students will gain an understanding of the importance and eloquence of the fewer than three hundred words that Lincoln used to convey his deep sense of regret at the loss of so many men and his hope for the future. The text of the Gettysburg Address is included at the end of the book.

Hopkinson, Deborah. Cabin in the Snow. ISBN: 0-329-29551-9. Lexile: 500.
Part of the Prairie Skies series, this bit of historical fiction deals with the rising tensions in Kansas in the decade before the war. The Kansas-Nebraska Act spurred clashes between free soil northerners and pro-slavery southerners over the spread of slavery into new territories. “Border ruffians” sometimes threatened families living on the isolated prairie. When Papa decides to stay and help defend the town of Lawrence against these ruffians, Charles must drive the wagon and supplies back alone. A looming prairie snowstorm, the imminent birth of a new sibling, and an unexpected visit from a family who holds a different viewpoint, forces Charles to take on new responsibilities and demonstrate maturity.

Hopkinson, Deborah. Sweet Clara and the Freedom Quilt. ISBN: 0-679-82311-5. Lexile: AD 680
Clara works as a seamstress in the Big House and longs to be reunited with her mama on another plantation. That would mean escaping, however, and how would she know where to go? Clara listens to all the talk around her, learns what a map is, and realizes that she can use scraps of cloth from her sewing to fashion a quilt, a map to freedom. Follow up the reading of this book with this interactive about the Underground Railroad from National Geographic. Using a format where students make choices to determine the outcome, it includes songs and sound effects and helpful links to timelines and maps.

Jones, Carrie. Sarah Emma Edmonds was a Great Pretender: The True Story of a Civil War Spy. ISBN: 978-0-7613-5399-7. Lexile: 780
Jones's book will certainly be of interest to students because of its content—a woman pretending to be a man and serving as a soldier, a nurse, and a spy. The book is a good example of choosing a focus for writing (Sarah Edmonds was good at pretending), and sticking to it. Students should easily be able to share the many ways that Sarah pretended at the conclusion of the reading. Pair this with Marissa Moss's book Nurse, Soldier, Spy: The Story of Sarah Edmonds, a Civil War Hero (below), which gives more specifics about Sarah's multiple roles in the war.

Karr, Kathleen. Spy in the Sky. ISBN: 9780786811656. Lexile: 320
Here is another fun fictional tale inspired by real events. Young Ridley, an orphan from South Carolina, soon finds himself acting as assistant to Thaddeus Lowe, an aeronaut whose test balloon has drifted into South Carolina at the start of the Civil War. Lowe has an idea to pitch to President Lincoln about the use of balloons to aid the Union Army in tracking Confederate movements, and Ridley learns Morse Code so that he can be the one to tap out the information. Use this online Morse Code translator and have students create short coded messages as an extension.

Lassieur, Allison. The Battle of Bull Run: an Interactive History Adventure. ISBN: 978-1-4296-3458-8. Lexile: 630.
Part of Capstone Publishing’s “You Choose Books,” this title invites students to “choose the path to take through history.” The introduction explains how the book works and the first chapter sets the stage. After that, there are three major story paths that can be taken, a total of forty-one choices that can be made (including whether or not students wish to be soldiers—Union or Confederate, or civilians), and fifteen different endings can result. The book was done with a consultant from Shepherd University’s George Tyler Moore Center for the Study of the Civil War, and contains many photos interspersed throughout. Additional resources are listed at the end, along with an index, hour-by-hour timeline of the battle, and glossary.

Moss, Marissa. Nurse, Soldier, Spy: the Story of Sarah Edmonds, a Civil War Hero. ISBN: 978-0-8109-9735-6. Lexile: AD 820.
This picture book biography focuses solely on one aspect of Edmonds's life—her years of service in the Union Army. Extensive author notes and caricature style illustrations by John Hendrix make it especially useful and appealing. Pair it with Jones's book (above) and compare and contrast the information in both volumes.

Stolz, Mary. A Ballad of the Civil War. ISBN: 9780060273620. Lexile: 680.
Inspired by a song Stolz learned from her mother and aunt (whose father and uncles served as Union soldiers), this tale highlights the enduring themes about the cost of war and the reasons why people choose to go to war. Twin boys growing up on a southern plantation find themselves having different opinions about their way of life and the slaves that they have always been surrounded by. Tom ultimately enlists for the Union, and Jack becomes a Confederate soldier. Though the story is only fifty pages long, there is much to ponder and discuss—the twins' relationship to their slave Aaron, the mixed emotions about the slave children in the quarter, Tom's treatment of the Rebel soldier he finds, and the device Stolz used to craft the structure of the story. A well-written tale of the “brothers' war.”

Follow up this book with a look at the words to the song that inspired it (at the back of the book). Discuss which parts of the song actually made their way into the tale that Stolz created. Then take a look at some other poems and songs of the period here. Project the words or provide students with copies of the words to a chosen song. In small groups or with partners, have students see if they can determine what specific events, topics, or realities the words refer to. Play the midi file for the song (by clicking the graphic next to the word “Music” at the top of the song page) so students get a sense of the rhythm.